This beautiful historical park in the centre of Orange was established in 1873 and covers an area of 4 hectares. It was named in honour of Captain James Cook.
Open every day of the year from 7.30am until dusk. Entry free. Bus groups welcome.

This 24 Pound Smooth Bore Cannon, (serial no. 69919) was cast c1806 at the Carron Iron Foundry in Scotland. It is a Blomefield Pattern Iron Gun and once formed part of the Fort Macquarie armament that was situated at the end of Bennelong Point, where the Sydney Opera House now stands.

Three sides of the fort faced the harbour with 24 pounders placed at each angle and mounted on a raised circular bastion, with a traversing carriage.

Cannons were standard artillery for their day and were used extensively in naval service and shore batteries and forts. It is estimated the range of the gun was approximately 1.3 km (1500 yards) with a charge of 11 pounds of gunpowder. The weight of the gun is approximately 1 tonne and the shot weighed 24 pounds, hence the name.

This is one of the only four remaining cannons from Fort Macquarie – one is at Hyde Park Barracks and two are located at Victoria Barracks, Sydney. The cannon was given to the City of Orange in 1904 by Sydney City Council. It bears the initials G3R, indicating it was made in the reign of George III (1751-1820). 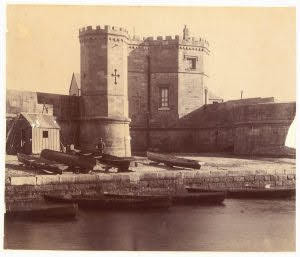 Fort Macquarie was built on the end of Bennelong Point, where the Sydney Opera House now stands. Completed by convict labour in 1821 using stone from the Domain, the fort had 15 guns and housed a small garrison. The powder magazine beneath the tower was capable of storing 350 barrels of gunpowder. The fort was demolished in 1901 to make way for the tramway sheds that occupied the site until the construction of the Utzon masterpiece.

C. W. Curran, a local storekeeper is claimed to have been the first person to introduce Begonias to Orange. Alf Blowes, who was Mayor at the time, showed interest in these plants and was instrumental in the building of the Conservatory in 1934. The central lantern of the building has ‘Blowes Conservatory’ in leadlight across its side.

The first begonias were donated by the City of Ballarat from the Ballarat Gardens and have been supplemented by the purchase of additional varieties. The collection is on display in the Blowes Conservatory from February until April each year when the plants are flowering. 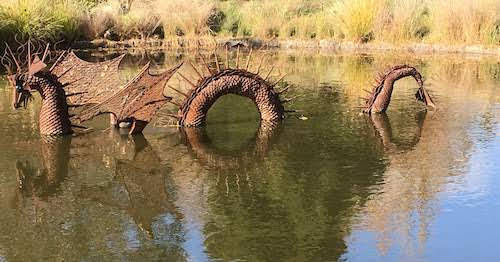 Monster in the duck pond.

Cook Park’s History
In 1873 the site of Cook Park was proclaimed as a park and in 1882 was officially named in honour of Captain James Cook.
From the 1870s onwards the first trees were planted resulting in today’s mature specimens. Andrew Patterson was the first curator employed in 1887.
Cook Park was laid out with straight paths and rows of trees, with much of the original design still in place.

Bastick Cottage in the Park

The Caretaker’s Cottage was built in 1887 at a cost of £185.
It was named Bastick Cottage to honour two former Parks and
Gardens Supervisors who, between father and son, gave 90 years of service to Orange.

The cottage now houses the Park Guildry, which operates as an arts and crafts shop.

The fountain was donated to the people of Orange by local storekeeper James Dalton in 1989 and it’s always held pride of place in Cook Park. The historic fountain includes a lot of decorative detail, including four cherubs and two overflow bowls.