About the Blue Mountains Botanic Garden

The Blue Mountains Botanic Garden, Mount Tomah sits on a basalt peak 1000 metres above sea level in the World Heritage Listed Greater Blue Mountains. The Gardens cover 28 hectares and is home to thousands of species of cool climate and southern hemisphere plants and is the highest botanic garden in Australia.

As well as many beautiful landscaped gardens and rainforest walks the Blue Mountains Botanic Garden runs events and workshops to inspire a love of plants. It is a stunning wedding location and offers accommodation in the Jungle Lodge.

Suggested 30 minute and 1 hour walks may be found on the map signs around the garden.

How the gardens are arranged

Plants at Mount Tomah are grouped according to their geographical origin and these are grouped into thirteen ‘Feature Gardens’ are where you see similarities and differences and learn about the evolution of flora from different continents.
Call into the Visitor Information desk just inside the main entrance for a garden map and information about the gardens and the Blue Mountains Region.

Conifers flourish at Mount Tomah with many unusual species when and an impressive collection of conifers in this feature in this section.

The Bog Gardens is a hanging swamp with a unique wetland habitat and is typical of hanging swamps in damp cavities on hillsides and cliff edges providing damp conditions loved by ferns and mosses.

Daffodils in the Brunet Meadow

This is a grassy glade with mature trees and shrubs and includes a collection of conifers.

The Proteaceae family includes waratahs, banksias, grevilleas and proteas. The Proteaceae feature garden is home to many bright and colourful waratahs, and African plants, like the Gazaland protea of Zimbabwe and the curious clasping-leaf sugarbush.

In spring the rhododendrons bloom in all colours, forms and sizes all with wonderful fragrances.

Inspired by traditional European styles, is laid out in three terraces. The Herb Garden has plants arranged in simple geometric beds, reminiscent of early monastery and university gardens. The Rose Garden has an intimate collection of modern and heritage roses. The Lawn Terrace recalls formal 17th-century gardens, with manicured lawns and clipped hedges. In contrast, the colourful Pergola Terrace is based on 19th-century English herbaceous borders. The Formal Garden is wheelchair-accessible.

A graceful collection of conifer cultivars selected for their superior horticultural features, like plant shape, growth form and foliage colour.

Near the Visitor Centre showcases modern domestic landscaping and features a sweeping lawn of rye and fescue grass with handsome specimen trees.

During autumn, this collection of evergreen and deciduous trees from Eurasia puts on a dazzling colour display.

A miniature world of texture and colour in this pretty garden displaying a colourful tapestry of heaths and heathland plants from the Northern Hemisphere, Africa and Australia.

The ‘fall’ season (autumn) is a blaze of colour in the deciduous section and features graceful trees including maple and beech.

There are two species of tree fern that occur on Mount Tomah. Both species are planted around the Visitor Centre. Cyathea australis (black or rough tree fern) is found on higher slopes. Frond bases are covered with dark, shiny scales. The local Aboriginal people used the stems of young fronds to make a tonic to use after an illness.

Dicksonia antarctica (brown or soft tree fern) is found in sheltered gullies. Frond bases are covered with coarse red-brown hairs. The pith from the centre of the trunk was eaten by Aboriginal people.

Their roots are very close to the surface and do not spread far from the main trunk. When growing tree-ferns, use of a good quality organic fertiliser and well-rotted animal manure – will keep the soil moist and provide nutrients to ensure healthy and vigorous growth.

The Waratah, the state emblem of New South Wales

The NSW floral emblem, the Waratah, grow extremely well at Mount Tomah. The Waratah has a long association with New South Wales and was adopted in 1962 as the official state floral emblem.

In the early years of the last century, there was a heated debate about the relative merits of the Golden Wattle and the Waratah as the national floral emblem. Those in favour of the wattle (mainly residents of Victoria and South Australia) argued that as the Waratah grew only in New South Wales, it was less suitable than the more widely distributed wattle. Although it is true that “Telopea speciosissima” (the New South Wales Waratah) is almost confined to the Sydney region.

At 1000 metres above sea level, Mount Tomah is the highest peak in the area and is significant to the Darug people whose traditional homelands extend from the mountains to metropolitan Sydney. Ancient walking tracks in the region linked the different tribal areas such as Darug to the Gandangarra, Wirradjuri and Darkinjung people. Tomah is the Darug word for tree fern.

George Caley arrived in the colony and soon realised that the local Aboriginal people had a wealth of knowledge and skills that would be invaluable to his scientific research. With their help In 1804, Naturalist George Caley visited Fern Tree Hill now Mount Tomah.

In 1823, two Darug men, Cogy and Emery guided Archibald Bell Jr across the ridges along one of the ancient walking tracks from Richmond past Mount Tomah towards the west. For “pioneering” this route Bell was rewarded with £400 and a 1000 acre land grant. Subsequently, the road was named after him – Bells Line of Road which runs from Richmond across the Blue Mountains to Bell. More Info

This new route presented travellers with an easy traverse of a fairly even plateau until it reached Mount Tomah. Mount Tomah defeated wheeled vehicles until the 1870s and as a result, Bells Line remained basically a drover’s road for cattle and sheep throughout the nineteenth century. 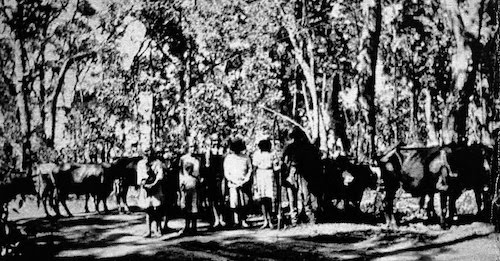 Mount Tomah itself was granted in 1830 to an English lady, Mrs Susannah Bowen, the daughter of a vice-admiral and the widow of a naval captain. She had arrived in New South Wales in 1828, after her son, George, a soldier who had settled in the colony as a surveyor and obtained land in Berambing, close to Mount Tomah. The square mile of land (1280 acres, 510 hectares) granted to Susannah incorporates the whole of the present village and Botanic Garden.
Susannah Bowen returned to Britain in 1836, leaving her son George with power of attorney. In 1838 he auctioned his mother’s Mount Tomah land, which was purchased by a friend, George Bartley, paymaster of the 50th Regiment at Windsor. It is unclear why, but in 1854 Bowen readvertised the Mount Tomah land for sale. When it failed to sell he passed it on to his son George Bartley Bowen just before his death in 1883. It was George Bartley Bowen who in the 1860s built Mount Tomah Cottage, a wooden cottage with a large stone chimney, within the area now occupied by the George Bowen Botanic Garden.

George Bartley Bowen continued to exploit his significant holdings on Mount Tomah, running his cattle there and planting orchards. In 1893, he sold his beef cattle and his Clydesdale horses and built up a dairy herd on the Mountain, including a dairy with a cream separator and a butter factory. This failed miserably. During the lengthy period of absentee ownership by G.B. Bowen and Charley, there were resident employees taking care of the cottage.
In 1895, G. B. Bowen sold all three blocks to Major Phillip Charley of Nth Richmond, now the St John of God hospital. He used the land primarily for rearing horses, including mounts for the Army.

Alfred Louis Brunet, the son of a farmer, was born in July 1892 in the town of Liglet, near Poitiers in western France; he received his early horticultural training in France and spent a short time in England before migrating to Australia. In 1927, he married Effie Jane Silvester at her family’s home “Wambiana” at Homebush, Sydney In 1935, the Brunet’s, paid Charley 450 pounds for 70 acres (28 ha) the now Botanic Garden. The property was largely covered with Bracken and strewn with basalt boulders. At its periphery near the old road were the last remnants of earlier habitation, no longer there. 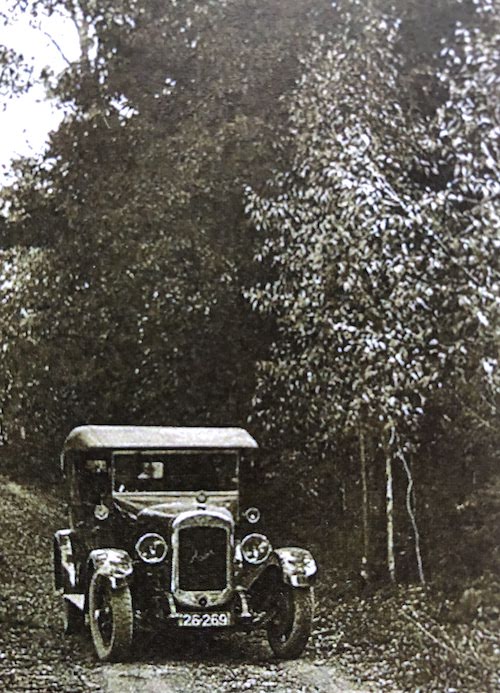 They soon established a nursery for cool-climate flower production growing bulbs such as of hyacinth, tulip, iris, lily, daffodil, lily of the valley, rhododendron, lilac etc. In the early 1960s Mr Brunet invited the Royal Botanic Gardens, Sydney to Mount Tomah with the suggestion that the Gardens should receive it as a legacy. Brunet died in 1968 and in 1970 Mrs Brunet signed the papers surrendering 28 hectares to the Crown for $1.
In 1972 the property became the annexe of the Royal Botanic Garden, Sydney. With the assistance of State and Commonwealth Bicentennial Development funding, the Garden opened to the public in 1987.

The Conservation Area to the north of the Garden was added to the estate in 1993. In 2008, the Royal Botanic Gardens and Domain Trust purchased 33 hectares of the original ancient forest, with the financial support of John and Elizabeth Fairfax and the NSW Government’s Environmental Trust.

The Wollemi Pine (Wollemia nobilis) is one of the world’s oldest and rarest tree species belonging to the 200 million-year-old plant family Araucariaceae.
It was known from fossil records and presumed extinct until t was discovered in 1994 by a National Parks officer, David Noble in the Wollemi National Park.
A majestic conifer with attractive, unusual dark green foliage and bubbly bark, the Wollemi Pine can grow up to 40 metres high in the wild with a trunk diameter of over one metre. The gardens are helping to preserve this rare species.

Pick up this History of Mount Tomah brochure at the visitor centre: